Race: Tsetar Angel of Thrones, death angel of Famine
Appearance: dense, black curly hair as soft as silk streaked with auburn and silver, one green eye and one pale-silver eye, flesh scribed in mythemyn cuniform, also bears Sammael's mark of soul and mark of possession, all carved into his flesh as elborate scar engravings. From his shoulders bones protrude with a few feathers clinging to them as remnants of wings which Sammael tore from him.
Scent: desert spices


1-Optical Illusion: change +1 visual aspect, +1 per ace as called.
2-Hallucination: cause hallucinations as called
3-Threshold: enter the dream of another and interact with dream as called.
4-Dreamsculptor: Overpower the mind to control dreams as called.
5-Virtual Impression: create a sensory hallucination that can be felt and experienced by all senses.
6-Conception: Overpower the mind to control a subject's sense of reality.
7-Conceptual Island: trap someone on an illusory or alter-reality island as called, limited boundaries.
8-Dreamland: trap someone in a called dream world, unlimited boundaries.
9-Dominion: trap someone in a called alter-reality world, unlimited boundaries.
10-Envision: pierce the veil to envision what is and what will become, to see present and future realities.
11-Endure: empower a reality affect to last for a called duration or until shattered (on a crit) or for up to +1 day per success, and +1 week per ace.
12-Formulation: create illusory wards, items, artifacts, on-the-fly spells and improve power by using reality powers at these levels.

Cirgoth's vision led Gabrian towards being joined with Braemen and Cirgoth, when all three kings came together while all three parts of Gabrian also become one again. Saeed, Sammael, Marsol + Braemen, Gabrian, Cirgoth AND he would become whole... It came to pass... a half antidote drunk of, but though the three kings came together, they did not unite, thus was the 'joining' but a brief glimpse and warning of what would come of an allience of the three kings of the far east. Gabrian desired to become whole again, but Braemen and Cirgoth did not wish to be 'absorbed' back into the horseman. What should come if the three should unite and Gabrian become one again? The horseman would be destroyed and a new angel reborn. Gabrian could put down his mantle of death at last.

Information
This was a creature few ever laid eyes on, a race which was seldom seen outside of their very isolated home land.  Some called his people Sand Devils, when in fact they were not devils at all, but an ancient race of goblins.  Like all of his kind his tough, leathery flesh was bright red, with a yellow belly and yellow and green stripes and spots on his legs, arms, tail, and face.  His large eyes were reptilian, yellow-green, and blotched with darker green, yellow, and blue.  His ears were large and tapered, crowning his head were bovine horns of green.  A wide mouth was full of very sharp, large white teeth.  His feet and hands were clawed.  He was colorful this one, a beacon during the day, but at night, he was very hard to see.  He and his kind were primarily nocturnal, and those large eyes could see perfectly in the dark.  He wore no clothing but a frontal loin cloth, and his weapon's harness, which was loaded.  His flesh was all the armour he needed.  His long reptilian tail was powerful with a fleshy arrow on the end.  It was easy to see why they were called devils, when in fact only red demons bore any resemblance at all to the iconic red devils with the pitch forks.  The Ardoreth Goblin could pass very well for the trademark devil.  What did set this rarely ever seen Goblin apart from his people, was that he was a horned clan demon, sired out of Sashima of the Battle Claw Clan. He was second generation. He had a name, and it was Kaamus.

Kaamus to Arilwen:
"Do you know that not all people who go to Hell are evil? Many become evil in hell though. Do you know why? Anger, resentment, shame, and despair. That is the recipe for evil. Spirits trapped between worlds with no form to enter into life again grow so angry and bitter that they become wraiths and poltergeists which haunt the living they so envy. Hell is like that...It separates you from everything but anger, pain and all that is heavy and weighs you down. It consumes the soul with the injustices of life and judgment. I did nothing to deserve Hell. I was sold into it. I was never marked and still I cannot escape it. I had a mate, children, a mother and father, brothers and one sister, aunts and uncles, and I was taken far across the sea from my home by slave traders who captured me when I went to sea, just offshore to fish. I was a prince...Prince of Mehr, but to those who attacked our boat, I and my brothers were no more than strong backs. We were sold at a market in Hassim and chained like animals, sent to work in a quarry in the desert of fire, where they worked my brothers until death, and I until I was skin and bones. Feeding slaves cost more than our purchase, you see. I was sold again, but who wanted a broken down goblin? A lady bought me, a demon, and she sired me a year after, and two years after that? She lost me in a poker game to Gabrian. That was..." he shook his head. "I do not even recall how long ago that was. I have lived in hell since, and I never, not even to this day, offered myself to hell. It does not own me, but I am still its slave. I have seen the heart of it, the true beast in others and in myself. Once in a while I get to see the world above...and remember all that I once was and lost. I envied Wyrvaust his pain, I was gladdened by it, because I knew from whence it came...Not from hell, but from up here, up here! Oh lucky bastard that he is! When this is all over, I shall have to go back below and wander those terrible corridors they call the lost caverns. Do you know what the lost caverns are? They are the places where only spirits and monsters dwell, where those who are lost roam. I am lost see? I can never go home and I am seen as a devil everywhere else. Perhaps one day I shall relent and give my soul to Gabrian or his master. But I keep hoping...he will sell me to someone up above." He imagined himself belonging to someone like Wyrvaust or Arilwen...just for a moment then sighed harshly. He could never be so lucky. 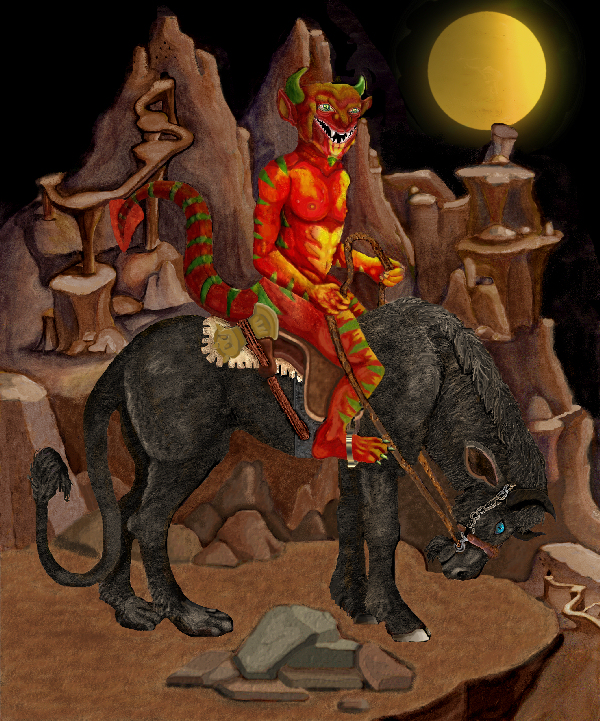 Ymogoir (im-O-gwor) are goblins are out of Anwnn but there is one ancient, isolated settlement of these colorful goblins in the Mountains of Ardemen in the Kingdom of Mehr, located in the far east of Andoreth beyond and bordering the Barren Seas Desert, east of Mephais.

Decription: This is a creature that few outside of Anwnn has ever laid eyes on, a race which is seldom seen outside of their very isolated homeland or home world. Some in Morashtar called these people Sand Devils, when in fact they were not devils at all, but an ancient race of goblins. Like all of their kind; their tough, leathery flesh is bright red, with a yellow belly and yellow and green stripes and spots on the legs, arms, tail, and face. Their large eyes are reptilian, yellow-green, and blotched with darker green, yellow, and blue. Their ears are large and tapered, and crowning a bald head are bovine horns of green. Their wide, lipless mouth is full of very sharp, large white teeth. Their feet and hands (five toes and fingers) are clawed. They are colorful this race, a beacon during the day, but at night, they are very hard to see. This race is primarily nocturnal, and those large eyes can see perfectly in the dark. They seldom wear any clothing other than a frontal loin cloth, the females a wrap for their breasts as well, and they are often well armed with weapons unique to their cultures, both in Anwnn and Mehr. Ymogoir tend not to wear clothing or armour, because their flesh is all the clothing or armour they need. Their long reptilian tail is powerful with a fleshy arrow on the end. It is easy to see why they are sometimes called devils, because of their resemblance to the iconic red devils with the pitch forks. The males tend to be built of hard sinew with well defined muscles, but they can become overweight or underweight. Heavy females are preffered by the males. Like many Goblins they are extremely fertile and because they have a very unique kind of DNA and genomes which can be traced back to the beginnings of many kinds of creatures, they can produce half-goblin offspring with humans, elves, native demons, and euyalians.

Culture: Ymogoir are very civilized. The Anwnn culture speaks Sioghan, the language of the Sidhe, while the Mehr culture speaks a varient of the Sioghan tongue with its own dialect which evolved from their isolation. These goblins are very clean, intelligent, and value knowledge. They have schools for their children which teach languages, history, math, the sciences, geography, metallergy, horticulture and farming, carpetry, masonry, other occupational skills, lore, and martial arts. Languages are brought to their schools from other regions, so these people can usually speak several languages. Many of these people are scholars and intellects. Like all intelligent people,however, some are lazy, others less scholarly or intelligent, some are more invested in combat, sailing, farming, etc. They are a peaceful race, until threatened and are not unfriendly to strangers unless one of them is just antisocial by nature.

Code of Honor: Many Ymogoir pledge to and live by a strict code of honor and ethics they call Penaudham. By this code, every citizen is the law and they must keep it, never to harm but to protect the innocent, always to combat evil, always to seek peaceful solutions before violence is employed, never to betray a pledge or trust, always to speak truthfully, and always to pay tribute and to free the soul of each life taken for food, by cutting out their heart and placing shells over their eyes. Not all live by this code of course, but few who do break their oath. To do so is to bring extreme shame to yourself and your family. Those who pledge to this code are called Knights of Penaudham. Females in this society are looked on as equals, be they home wives, warriors, shamans or scholars.

Shamans: Ymgoir Shamans learn Elemental Lore, in which words of power used with tributes of earth, water, wind, fire, life tributes (the body parts or blood of animals), plants, etc are used to power or enchant runes, glyphs, markers, scrolls and items. Lore is used chiefly for warding but also to power items, for summoning, and to enchant things. Shamans also learn to make potions which heal, revitalize, cure disease and poisons, alter the state of something, purify, etc. They also learn to make various kinds of poisons and drugs from plants and minerals.